skip to main | skip to sidebar

Should have been posted last week. Lets just say life ain't been panning out lately. Argh.

Public service? Yeah, I'm stretching a bit. I'm working on the Masters thesis and am a bit brain fried. I've actually forgotten my PIN number three times this month, a number I've had for seven or so years! Public service refers to the public service announcements I scattered through the show, starting with the old Cold War era "Duck and Cover," as well as appearances by Alf, Clint Eastwood, Cookie Monster, and more. Listen here. As far as the tunes go, here's the rundown:

The gem of the week is the Rolling Stones "Too Much Blood," a song that appeared on Undercover back in 1983. This is the dub version of the song, and it is completely freaked out. It's a great jam from a hugely under rated album.

Apologies for missing a week. I had technical difficulties last Tuesday that led to the loss of my podcast file. Frustrating, to say the least.No worries though, I'm back on track this week. No theme this time around. The episode title refers to the ominous Jim Jones outtakes that lead into the equally disturbing Comus track kicking off the show. Here's the complete track listing:

I'll be moving in a few weeks, so I'm not sure how many more shows I have left. No sense in dwelling on that- I have plenty of material to still get to. Enjoy!
Posted by Mike Mannix at 12:39 AM No comments:

The Good News:
Missing Link Records opened today! Well, sort of. They opened from noon to 6 in order to see how an actual business day would play out. The store looks great. The records were even better. Matt and Adam are still working out some kinks and getting more records and cds ready for the shelves. Word is they will be ready for the masses some time next week. Don't forget about their grand opening celebration next Friday! 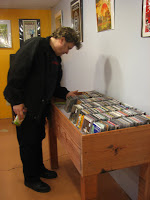 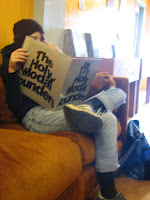 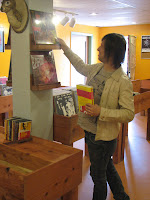 The Bad News:
Last night's episode of Psych Out! will not be available via podcast. There was a technical mishap while saving the file, and the file was ultimately lost. Damn.
Posted by Mike Mannix at 7:49 PM No comments:

The Little Veal Cutlet That Couldn't

It's not exactly music related, but it's close. Maybe I should attach a Vegan Reich or Raid download. Everyone is reviewing music for the North Coast Journal these days. I figured a book review would increase my chance of getting a couple more reviews in before summer. Makes a great gift.
The Little Veal Cutlet That Couldn't
By Ryan Forsythe and Cassie Hart

It seems to me being a vegetarian requires possession of a good sense of humor. The decision to stray from the meat-and-potato traditions of my family certainly exposed me to more than my fair share of ribbing and ridicule, and I don't think I would have handled those ordeals so well if I didn't go through them with a smile. Perhaps this explains how The Little Veal Cutlet that Couldn't so easily drew me in.

Written by Redwood Hostel manager Ryan Forsythe and poignantly illustrated by Cassie Hart, the book seems a children's tale in appearance, script and rhyme. However, parents and buyers beware, for as Forsythe himself notes, "it's a children's book that's decidedly not for children." In fact, the tragic tale of the sad fate of Betsy the cow and her son Jake (spoiler alert: both become dinner) deals with issues -- factory farming, exploitation and greed -- not easily digested by many parents or, for that matter, this country's population in general. 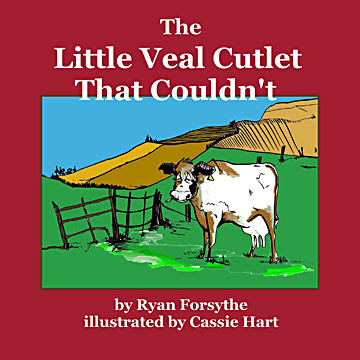 The strength of the book is found in its ironic treatment of morals and themes originally presented in Watty Piper's popular The Little Engine that Could. And in targeting this classic, Forsythe and Hart join fine company, as both Shel Silverstein and Lemony Snickett have alluded to the trials of Piper's tireless train. What distinguishes this effort is Forsythe's ability to stand the lauded tale completely on its head and do so with timely and urgent relevance. Whereas Little Engine's resounding mantra of "I-think-I-can-I-think-I-can" is indicative of the self-determination prescribed by the American Dream, little Jake's investment in the same belief ultimately leads to his unfortunate end and reflects the lived realities of a society mired in disillusion, corruption and shattered dreams.

For some the dark humor presented in the book will seem obnoxious and a bit self-indulgent. I would like to propose, however, that this humor has universal appeal and potentially serves as a point from which dialog around issues of vegetarianism and animal welfare can begin. Clearly, with only about 3 percent of citizens in this country embracing vegetarianism, the years of moral, ethical and (more recently) intellectual appeals have fallen short of proponents' utopian goals. Maybe it's humor, as morbid as it can sometimes appear, that provides a common ground for different sides to come together, not only to share a laugh but to also engage in productive conversations about environment, sustainability and fair business practices.

After all, if we are to put any stock in the vision of this country's new leadership, realizing and redefining the American Dream begins with thinking we can.
Posted by Mike Mannix at 10:36 AM No comments:

Episode Five: All Keyed Up

Whew. Finally back on track! Thanks to everyone who stuck with the HFRA during our relocation and thanks to everyone checking out the new episode. This week's theme is all about the keyboards: Hammonds, Moogs, pianos, synthesizers, and all the rest. Here's the lineup:

I think it's a pretty good balance of both new and old material. Atilla features a young Billy Joel on fuzzed-out organ and is totally worth checking out. I'm seeking ideas for a new episode theme. Suggestions are welcome.

Posted by Mike Mannix at 6:57 PM No comments:

Hey all. If you're in the Humboldt area on Friday, April 10th, Sarah Spears and I will be presenting some of our photo work in Arcata at the grand opening celebration for Missing Link Records. Sarah has been showing her work for some years now, but this is my first attempt to show off some photos. In other words, I'm pretty nervous.

Your support for both the store and us would be greatly appreciated. It's all part of Arcata's monthly Arts! Alive event that features local artists and musicians presenting and performing in dozens of downtown businesses from 6-9PM. 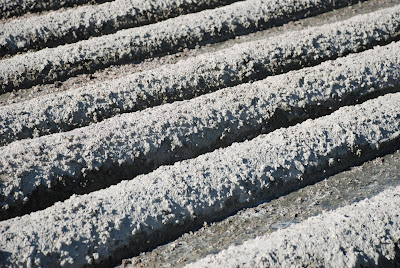 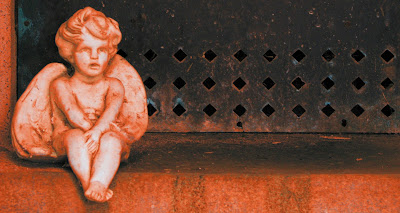 Posted by Mike Mannix at 9:58 PM No comments:

The Humboldt Free Radio Alliance is back on the air! That's 99.9 FM in the Arcata, CA area. Thanks to a generous new landlord and lots of hard working pirates, regular programming is returning to normal. The afternoon newscasts will be down for a couple of more weeks as an Internet connection is still needed, but the Tuesday through Sunday shows are getting back in action immediately. Psych Out! podcasts will start again this coming Thursday.
Posted by Mike Mannix at 3:25 PM 1 comment:

Other
My Archived Reviews